Fill Your Growler at The Hoppy Brewer | Growler History 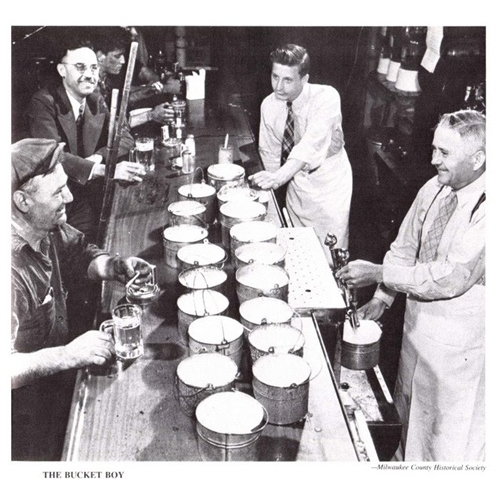 Looking for a place to fill your growler? Bring your 64oz growler or your 32oz growlette into The Hoppy Brewer and we will fill it with your on-tap beverage of choice. With 28 rotating craft beers on tap, you’ll always find the right brew for you. Super easy! Growlers haven’t always been so simple to obtain. In the early days of growlers, you would’ve waited for a hired child to carry your can or bucket of beer home for you. These days when you want to take home a 64oz growler or a 32oz growler you can easily visit our taproom in downtown Gresham for a refill. Read more about the history of growlers below.

Before bottled beer became economical and common (especially after the widespread use of pasteurization in the mid-1800’s) in the US, if one wanted beer outside of the saloon, it was usually draught beer filled and carried out in a growler, aka a “can” or “bucket” of beer. Many different containers (including pitchers, other pottery or glass jars and jugs, etc) were used to carry beer home or to work – the most common “growler” was a 2 quart galvanized or enameled pail as seen in these illustrations. Pitchers/jugs, however, tho’ not as nostalgically romantic, were also routinely be referred to as “Growlers”. See Stoneware jugs or pitchers as Growlers While many children were employed by parents and others to “Rush the Growler” (or “Rush the Can”), as can be seen in the photo directly above, adults also were “Bucket Boys” or “Kesseljunges” (a German term apparently used in Milwaukee in particular). Note the notched poles above which will be used by the “boy” to carry the growlers back to the workplace, as is being done with the empties (above left). The beer in a growler was sold as a “pint” but most bartenders by tradition filled a growler with close to a quart of beer- the excess space taken up by the generous head on the beer. During the early 20th century when the “nickel beer” was standard, a growler fill was commonly5-15¢ (see prices below left). While the origins of the “Growler” term is much in dispute on brewerianaand etymology sites, some contemporary sources suggest that it was the constant conflict between the two parties – the bartender who’s filling atwo quart pail with a pint of beer – and the customer looking for a full pail- which caused the “growling”.

Ready to fill your 64oz growler or 32oz growlette?
Check out our current Tap List.

SRC: Click to learn more about the history of growlers.